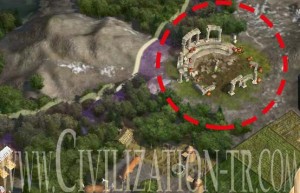 As you all know, in the beginning of every civilization V game, we explore for ancient ruins, and everyone we found gives us good advantages for the beginning.

With Archaeology that is coming in brave new world expansion, as the game proceeds and we have found archaeology technology, it takes us to a new exploration in late age.

Antiquity sites doesn’t appear out of nowhere. All of them have a history that happened in early ages of that specific game. In example;

With the new Archaeologist unit, we can reveal these antiquity sites.

It doesn’t matter if the archaeological antiquity site is in our lands, or in a foreign nations land. If we have open borders agreement, we can steal artifacts as a great work of artifact.

Archaeologist works just like worker. We move on the antiquity site, and begin an archaeological dig (as can be seen in picture below). 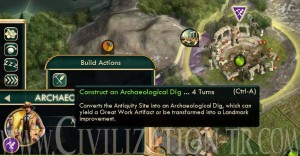 After 3 turn we decide on what to do with the artifact. We need to choose what to do as can be seen below.

1) Take artifact as a “Great work”
2) Build a landmark

Landmark is, same as before, it was being build by a great artist before brave new world, and now by an archaeologist on a tile with antiquity site.

It’s does the same thing, gives culture on that tile, but culture bonus increases by how old the antiquity site is. (older > more culture) Between 4 to 10 culture.

If we take it as a great work of artifact, it sits on a city in the slot of Great Works of art. (“Great works page”) . And it gives tourism and culture.

When we have sent an archaeologist to a foreign civilization, we will most probably steal this antiquity site as an artifact, if we do seo, we will receive a diplomatic penalty with that civilization. They will be angry with us throughout the game.

Own an antiquity site

Strategy: If you want to guarantee taking an antiquity site without taking risk of somebody else taking it. You can put a unit on the archeological antiquity site, and therefore no other nation can get their archaeologist to work on that tile. Just wait until your archaeologist is ready, and it is yours.

Which era these antiquity sites are coming from matters on the theming bonus, there is more information about theming bonus in Great Works page

Click to continue to the next page: Great Artists, Musician, Writer

This site uses Akismet to reduce spam. Learn how your comment data is processed.